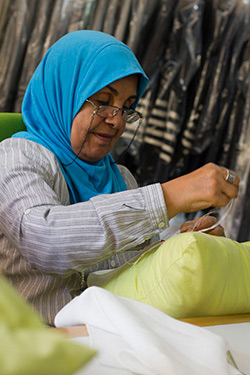 Khadija is Iraqi. She wears the smile of her suffering. She is in her forties and married since 1986 to a Moroccan living in Baghdad. Through their union, two sons have been born. In Iraq, Moroccans are praised for their seriousness, their friendliness, and their attention to work. Khadija has worked in an association for the deaf-mute for 5 years. When her two boys were born, she stopped working to take care of their education. Her husband, associated with an Iraqi in a poultry and cattle ranching business, earned a good living.

After the Iraq war, things have changed. Islamists controlled everything, especially everyday life, and people’s lives. The couple received threats. Either you divorce or we kill you! Her three cousins, M’hamed, Adil, and Karim were arrested by the militia, tortured, and executed. On the corpses dumped in a landfill, a videotape was left showing the torture they suffered before they died. Their crime? One of the cousins ​​went to ask the imam of the mosque next to his house to turn down the sound of the speakers of the minaret a little. What do you have against the word of God? That was enough to murder three innocent people. In 2006, her two children and their classmates were killed at school in an explosion. After this tragedy, the couple moved in with a relative. Their house exploded a week later. Not wanting to leave her husband, they decide to leave the country.

At the Jordanian border, she was stripped off of her jewelry and the money the couple managed to save by mercenary soldiers. They entered Jordan with nothing. The Moroccan Consul in Amman issued them passes and gave them some money. Khadija still remembers with gratitude this man who did everything he could so that the couple could return to Morocco. The welcoming of the Moroccan family was, for the two survivors, the worst thing that happened to them. Penniless, they were left in the terrace-like useless objects, says Khadija. Horrified by this behavior, a neighbor offered to house them. Finally, the mother gave the couple a room. Khadija fell into depression, delirium and no longer wishes to live.

Whenever she happens to pass by the Fondation Orient-Occident, she sees crowds of sub-Saharans, women, children, and young people all the time. She hears music and the rolling of the drums. She then gets informed that it is a foundation that doesn’t only help migrants and refugees, but also Moroccans in vulnerable situations. Khadija has knowledge of embroidery and sewing. With that, in September 2012, she joined the “Migrants du Monde” workshop. She wipes away her tears and says, “A large door has been opened for me. Right away, the Foundation gave me money. But other than money, it gave me hope, got me out of my depression, made me want to fight and live. Everyone respects me here and I found a family in this workshop. Every woman has become a relative for me, a sister, each one with her own culture, her identity, her history … and, in the face of the tragedy of some, mine seems negligible to me. Thanks to the work I do in the workshop and the salary I earn, the way my in-laws look at me has changed ever since. I help with the household expenses, give allowance to my husband, and from time to time I give gifts to my mother-in-law. My people threatened me, chased me out of my home, killed my children, my cousins, blown up our homes. The Foundation, if it cannot replace all that I have lost, offered me a certain sense of security, surrounded me with affection, taught me and freed me from my dependence on my in-laws…”

As for the possibility of returning to Iraq, Khadija choked with emotions. She eventually calms down, dries up her tears, and adds, “Iraq is my country… It’s a very beautiful country… Go back? Of course… I dream of this all the time… but…” She does not finish her sentence as she couldn’t resist her tears thinking about her dream. Khadija bursts into tears.

*Since a few years, Khadija left the Workshop and found a new job opportunity. This story was collected while she was still working at the Foundation.