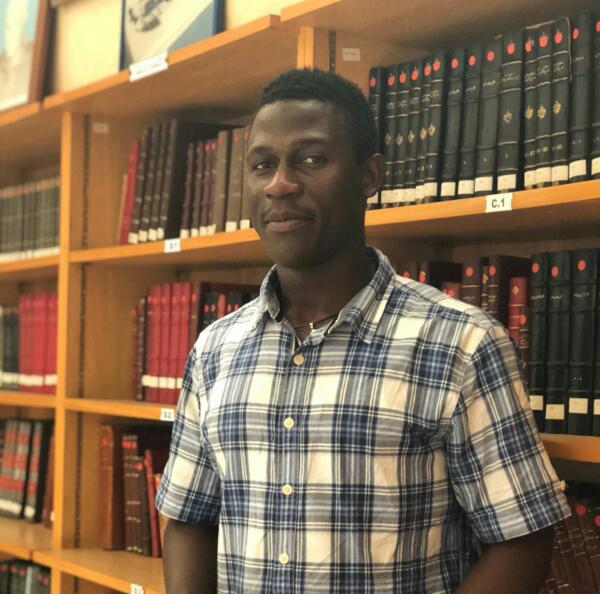 *This story has been written by Ephesian in person (for this, the unique writing style).

My name is Fonye Ephesian. I am a Cameroonian of 21 years old.
It all started with thoughts and beliefs backed by definite plans and clear visions. Courage and worries were written in my doubts, showing me the faith I have never known. I remember late in the summer of my young and more spontaneous years, a day of grace and blessing. My mother asked me “what would you like to be in the future?” As a teenager, full of beautiful dreams, I replied “I would like to be a military man to guide and protect you whenever you get old”.

With a smile she looked at me, I could feel the love and pride written all over her face. Indeed, my determination to succeed was so strong that I believed failure would never come my way. Life continued as usual, the days passed by without much worry. But my worst nightmare arrived the moment my mom felt sick. She struggled to survive to the extent that her last chance became death. She left me all alone in this world without even saying “goodbye”. Then, I trembled at the rate of motion, and I lost total control over my body. I had no other choice to live than to dance in the storm.

Meanwhile, my situation in Cameroon became more and more complicated to the extent that I was forced to leave. The first step of my journey soon became a voyage of a thousand miles through Nigeria, Niger, Algeria, until I arrived in Morocco, where I am now. The journey through Algeria was one of the most difficult experiences of my entire life. I spent two weeks in the Sahara desert in search of a way out. The shortage of water and food exhausted me, the hot climate of almost 50° tortured me until I was left with nothing but hopeless faith. There I almost surrendered my existence. I must praise my mother’s spirit, my heart, my soul, my everything for guiding and protecting me during this period. If I believe in God today is not because my mother or the church taught me to do so, but because of the wonders he has done in my life.

I arrived in Morocco in the final months of 2017. I was received and recognized as a refugee by the United Nations High Commissioner for Refugees (UNHCR). Then, the UNHCR suggested I go to a place, the Fondation Orient-Occident, that was to become the founder of my new world, my new dream and the place I call home. Here, I have been offered free studies, and the opportunity to improve my language skills in English, French and Arabic. Additionally, I studied radio broadcasting for six months, and I was engaged in a startup experience. I have learnt how to build projects as well as financial and commercial plans.

My life in Morocco developed positively and I am now also a proud founding member of the Salam media web radio TV project situated at Sale (Ouet). Furthermore, I took part in the creation of the “Odysee de Notre Temps,” by Jean-Luc House, in the festival of ‘’Karacena’’ 2018; the festival was organized by the national school of Sircus ‘’Shemsy,’’ where I currently study as an upcoming artist. I use this opportunity as a privilege to thank the UNHCR and the Fondation Orient-Occident for building the hopes and faith I once lost in my entire life. Also, I want to thank my inspired friend Jack Ruszkowski and his friend Amanda Daskavich with Mme Delphine Dubois and Mme Celine Lambre, and, in general, all the members of the Odysee – it is because of you people I feel free in writing this small portrait of mine. Nothing tells me more about how to be alive now than learning from those who are; for this, I feel the inspiration to listen to other people’s stories, and I wish to help the Fondation Orient-Occident by curating and collecting the stories of its people and that of their journeys. I have realized how life feels better when sharing with others.

Ephesian has helped the Foundation doing an internship with the communication team, in the framework of a storytelling project. Since 2018 he left Morocco and as part of the UNHCR resettlement program for refugees, he was able to start a new life in the USA. He now lives there and has found a job, and is soon planning to start a BA at University.