Fondation Orient-Occident participated to the “16-Days of Activism against Gender-Based Violence” Campaign, through the organization, in partnership with UNHCR, of sensitization workshops against sexual and gender-based violence against women, in various FOO centers, namely Rabat, Casablanca, Oujda, Fez and Tangiers. The workshops have seen the participation of arab-speaking Refugees and Refugees coming from sub-Saharan Africa.

The Campaign
From 25 November, the International Day for the Elimination of Violence against Women, to 10 December, Human Rights Day, the “16-Days of Activism against Gender-Based Violence” Campaign is a time to galvanize action to end violence against women and girls around the world. The international campaign, which takes place every year, originated from the first Women’s Global Leadership Institute coordinated by the Center for Women’s Global Leadership in 1991.

This year, the Campaign will mark the “16 Days of Activism against Gender-Based Violence” under the overarching theme, “Leave No One Behind: End Violence against Women and Girls” – reflecting the core principle of the transformative 2030 Agenda for Sustainable Development.

“Leave No One Behind: End Violence against Women and Girls” reinforces the commitment to a world free from violence for all women and girls around the world, while reaching the most underserved and marginalized, including refugees, migrants, minorities, indigenous peoples, and populations affected by conflict and natural disasters, amongst others, first. 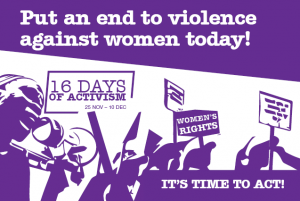